Honours Even at Paignton FISA Regatta 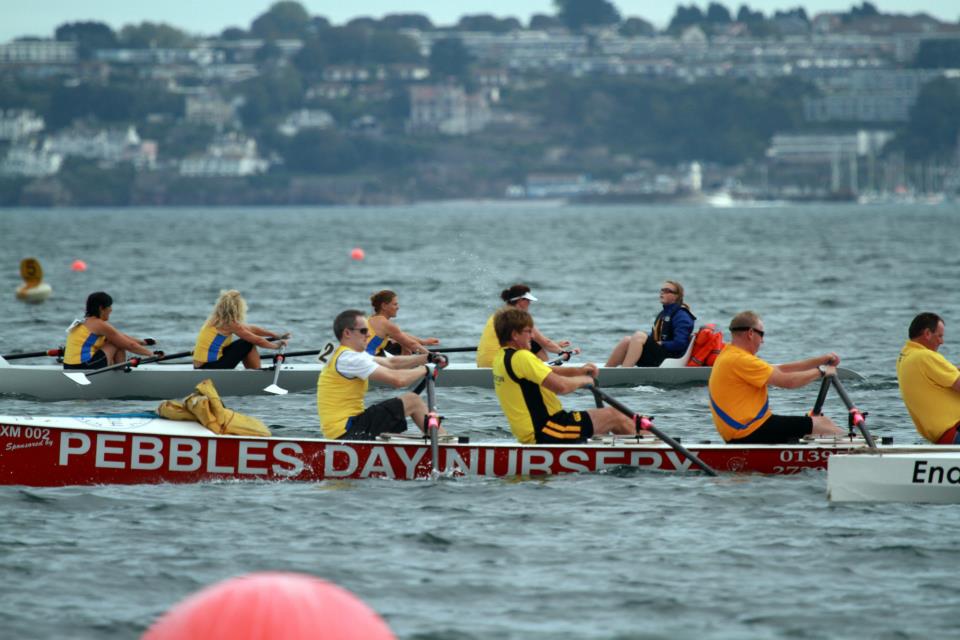 All five clubs that competed at Paignton coastal rowing regatta went away happy on Saturday, with an event win each. Thirty one crews took part over two laps of a four kilometre course in sheltered Torbay. Conditions were good for fast racing with the water, featuring a slight chop due to a south-easterly breeze but mostly calm.

The men’s race started proceedings with a selection of quads and doubles making up the 10 crews. Torquay, winners last week at Exmouth, led from the front and – despite the efforts of the chasing pack – made it two out of two, winning by a comfortable margin and with a time of 37 minutes and 43 seconds. There was stiff racing down the field with Paignton A and Teign Scullers battling fiercely the whole way round. Twice the boats clashed, and in the end Teign Scullers came out on top of that battle by 11 seconds.

The women’s race featured a strong field which included defending champions Mayflower Offshore and three crews from Exmouth, who were using the event as a warm up for next month’s World Championships in Bari, Italy. The fine conditions allowed both of these clubs to pull away right from the start, stringing the field out in the process. Mayflower took the lead after the first buoy turn and controlled the race from front to successfully defend their title.

The mixed crew race combined with the juniors and took place over 1 lap which produced an open race. Exmouth became the third different crew of the day to win a trophy with their World Championship hopefuls pulling clear of the field and setting the fastest lap time of the day in the process.

Paignton produced a fine result in the juniors' race by taking first and second. Bridget Garry and Laura Tucker finished ahead of the quad of Paignton B with Torquay taking third.

With everyone else already having a trophy to take home it seemed only right that Teign Scullers should win the final event, the veterans, although they may be wondering why theirs is much smaller than the others. Whilst they will be disappointed to miss out on a trophy the Paignton women must be very satisfied after they beat Paignton men.

At the trophy presentation a surprise sixth trophy was produced for the best overall club based on top 3 finishes, this went to Exmouth for their consistent high finishes throughout the day. Entertainment was provided at the clubhouse bar by Rob Shaw, where the Paignton rowers could celebrate a successful season and relax before the commencement of winter training and preparations for next year.